The vampire writes her letters, thinking she is still innocent prey.

“I just want to explain what happened all those years ago,” he says, “my side of the story.”
He writes about his victimhood, poor vampire, how he was maligned, mistreated. He writes gossip that fairly drips off the page with malice- he writes lies, twisting her family into nightmare shapes, simply to prove himself a mistreated hero in every tale.

The ink drips with her own blood. She can see it, because she’s been given the lenses to see, now, and for the rest of her life – but he doesn’t know that.

She smiles, and with a blink, she sets his words on fire. They burn to ash in seconds.
“I am. Vampire-bane,” she whispers, brimming with delight, fizzing with the joy of her new-found power.

It is clear from his words he still thinks she is naive, innocent, wide-eyed and believing in him.
He believes other people are keeping her from him, locked away in a tower, poor helpless Rapunzel. She chuckles, and her ghost cat nuzzles her hand. She smiles at him, and her eyes narrow.

“They think love is weakness, these vampires,” she says to the cat.
He lifts his copper eyes to hers and sits, quietly. Green eyes and copper. Both smile at the same time.

You see, she had changed. She was much more powerful now, and innocent no longer.

There had been another. (Vampires tend to swarm like the vermin they are, so there won’t usually only be one.)

He thought to climb to the tower, present himself as a hero who was there to rescue her and bring her into the world, and oh, she believed him. She believed him for years, in fact.

“You tried to tell me, didn’t you, Figaro, but I was still naive.” Figaro (for this is the cat’s name), purrs. He understands. She has a hopeful heart, which blinded her to the trash under the illusion – she couldn’t help it.

The “hero” climbed to her tower for years, and subtly broke her down. He would tell her of loves he’d had, and then hold back any kind words, any affection to her. He would continually show disappointment in her lack of beauty.  He painted the inside of her tower with dismal hues. He was impatient with her, blaming, devaluing. There were no mirrors in her tower, so his words became her truth.

Her mind is fuzzy when she tries to remember the ways he had her afraid, jumping through hoops, ultimatum after ultimatum, and somehow, somehow, keeping her in the tower, while convincing her he was saving her. Somehow convincing her that his silly, ridiculous vampire self was powerful, and knew better than she. Why on earth had she kept allowing him in?

She learned that the beautiful hero illusion in the beginning, while lovely, was a part of the vampire poison. It was the part of the act that was designed to lull her into a fantasy, and keep her grasping for that taste of goodness she’d been given, hanging on, hoping it would come back – if she could just become good enough in his eyes.

Then, one day, the vampire misstepped. He went too far. He broke a deeper word than the ones he usually broke.

Still, she tried to believe in him, thinking she was mistaken. Still, she shielded him, and told everyone in the kingdom that she supported him and his decision was the right one.

She chuckles. Oh, his decision was the right one.

Then, he went even more too far.
He went. Too. Far.

It happened like this: Figaro was dying, and the vampire did not even acknowledge it.
Her soul became steel, in that one misstep of his.

Two very foolish missteps: he might have recovered the first, but one misstep was so completely a violation of every single thing in her soul, that everything she’d ever believed or felt for that charlatan, every illusion he’d spun in her heart, turned to icy contempt.

Not even anger: utter indifference.

She felt the way we’d feel if we had left the trash rotting in our house too long – Disgust. Throw it out. Why on earth was that trash in here? –

Rapunzel, in her quest to become free of the darkness of her tower, began learning from a healer. Hundreds of sessions working hard, in front of color-shifting, bright moon-lights, shaped her into vampire-bane.

This teacher also gave her a mirror.

She repainted the inside of her tower.

She saw the “hero,” met him again, and listened, Listened.
He thought she was still innocent, fooled by him, trapped in his illusion.

He had turned her trust upon herself, and fooled her with fairy-tales.
So she turned his trust upon himself.

Walking toward her, playing his usual sentimental role, he stepped in front of her mirror.
She saw the last proof she needed.  The “hero” had no reflection. She saw her own image beyond him – that she was, in fact, beautiful, in her own way. She saw her own power.

She found out his secret – that he had a hidden relationship, and in fact, was planning to marry very quickly.

Would he abandon that wedding, too? She chuckled. It was frivolous, embarrassing, silly. One tear dropped from her eye for that poor, deluded woman- “bless her and protect her, poor woman,” she said, and turned her heart to more important matters.

As Figaro’s life force left him, he gave it to her- his sight- the awareness that this heart-bond was deeper and more true than anything she’d known, and it would become her lenses to help her see clearly. Anyone who showed no caring for Figaro’s life and death had shown their true colors to her completely, and was instantly banished from her kingdom. Coldly, swiftly, without thought or caring, they were locked out for good.  They would no longer have access.

And one more talisman he gave her: the knowledge that her heart, her love was more powerful than anything the vampires could do.
The ability to see how sad, how lost and unloving, how ridiculous their antics were.

She carefully plucked a thorn from her roses- the thorns are the protectors of true beauty – and with the ancient magic she’d been given, she willed it to grow large, to become a stake of truth.

she turned, chuckled at that ridiculous circus-act of a “hero,” and lightly flicked the stake toward where the vampire’s heart would be.

The silly vampire, in the light of her heart, with one touch of the stake, gave a pathetic, self-pitying wheeze, and collapsed into a pile of ash.

“There are no heroes,” she said, as the stake crumbled away to ash, its job complete.

She held Figaro. He cuddled closer to her chest and breathed once, twice, and one last time. His beautiful, sweet life left his body.

This grief was clean, pure, and true, and she would never be the same.

“There are no heroes.” 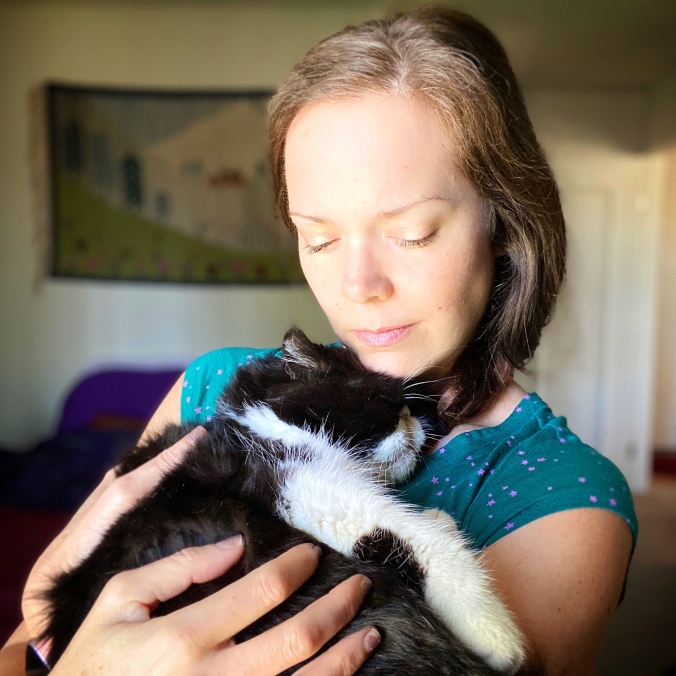 postscript: Do not be fooled by temporary, gentle-seeming appearances. Did a vampire come back into your life, and lead you to think that perhaps he had grown kinder? THEY CAN’T. They can only act, and wear masks. Since this article went up, I have had proof- VAMPIRES DO NOT CHANGE.