Long ago, I wrote a song called “I Will Give You Ireland.” It was an impossible fairy tale, a Maxfield Parrish painting of luminous idealistic nonsense. 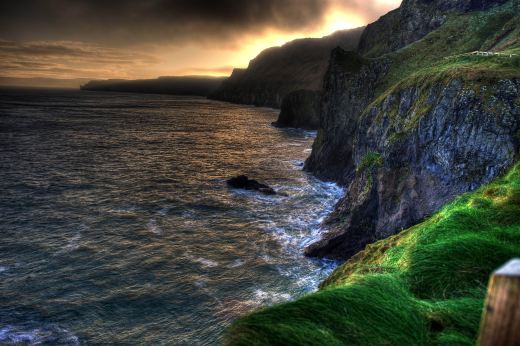 I still love Ireland in that way: with blinders on; with an infatuation that puts Her on a pedestal and doesn’t let Her breathe. My memories are those of a kid- of golden light on grey stones and an impossible green that brought tears to my eyes… of friendly, warm people everywhere we went, who offered us hospitality…of music, and of magic. That was my Ireland. She is magnificent…but I know it’s not a whole picture.
So in antidote, here is Seamus Heaney – often too gritty for my taste, I have still always been drawn to his work.
The big lesson that came to me today is about loving a whole human being, with his flaws. About trusting him, and remembering to see the good also, even in the midst of darker places. It is about loving myself, too, shadow and all. What a gift.
I hope one day to see the places of my childhood as a whole and love them even more deeply with the flaws – even the flaws that crack my heart open.
Beannacht Lá Fhéile Padraig!
From Lightenings by Seamus Heaney
I
Shifting brilliancies. Then winter light
In a doorway, and on the stone doorstep
A beggar shivering in silhouette.
So the particular judgement might be set:
Bare wallstead and a cold hearth rained into-
Bright puddle where the soul-free cloud-life roams.
And after the commanded journey, what?
Nothing magnificent, nothing unknown.
A gazing out from far away, alone.
And it is not particular at all,
Just old truth dawning: there is no next-time-round.
Unroofed scope. Knowledge-freshening wind.
VI
Once, as a child, out in a field of sheep,
Thomas Hardy pretended to be dead
And lay down flat among their dainty shins.
In that sniffed-at, bleated-into, grassy space
He experimented with infinity.
His small cool brow was like an anvil waiting
For sky to make it sing the prefect pitch
Of his dumb being, and that stir he caused
In the fleece-hustle was the original
Of a ripple that would travel eighty years
Outward from there, to be the same ripple
Inside him at its last circumference.
VII
(I misremembered. He went down on all fours,
Florence Emily says, crossing a ewe-leaze.
Hardy sought the creatures face to face,
Their witless eyes and liability
To panic made him feel less alone,
Made proleptic sorrow stand a moment
Over him, perfectly known and sure.
And then the flock’s dismay went swimming on
Into the blinks and murmurs and deflections
He’d know at parties in renowned old age
When sometimes he imagined himself a ghost
And circulated with that new perspective.)
VIII
The annals say: when the monks of Clonmacnoise
Were all at prayers inside the oratory
A ship appeared above them in the air.
The anchor dragged along behind so deep
It hooked itself into the altar rails
And then, as the big hull rocked to a standstill,
A crewman shinned and grappled down the rope
And struggled to release it. But in vain.
‘This man can’t bear our life here and will drown, ‘
The abbot said, ‘unless we help him.’ So
They did, the freed ship sailed, and the man climbed back
Out of the marvellous as he had known it.